Latest wagon-shaped retail therapy to hit the shops comes in the form of Bachmann’s range of SR ‘Pillbox’ brakevans.  These come in a commendable range of variations, reflecting not only changes in livery as you’d expect, but also the three distinct patterns of bodywork prevalent through the build runs.  This van is the 25T version – there was also a lighter but less numerous 15 tonner, easily recognisable by its much shallower solebar.  Another recognition point, for BR days at least, is that the 25T vans generally lost the distinctive sandboxes at the ends, whereas the 15 tonners kept them.

Without thinking too deeply about it, I went for the BR bauxite version, which is an even-planked van with right-hand duckets; I do fancy an uneven-planked one, which is for the moment only being issued in SR and olive green liveries, but I’m in no rush and will see what comes along in the next batch. 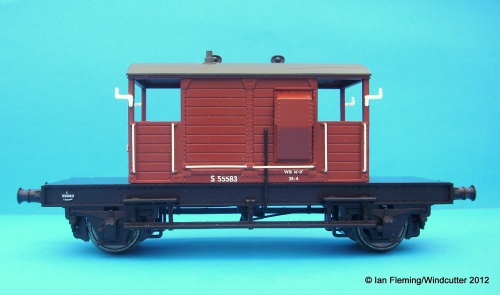 There’s not a lot to say about basic aspects of the model other than that it’s well up to the standard you’d expect, crisply moulded and capturing the shape and general appearance very well.  Distinctive features like the deep solebars and self-contained buffers are very well rendered.  The stepboards seem a tad more sturdy than those on Bachmann’s BR brake vans, and the handrails are now in metal rather than plastic, which should enable them to retain their shape much more easily.

Errors are few, and all pretty minor.  They appear to be tied in with the change from the left hand ducket of the first vans to the right hand arrangement, and the consequent positioning of the chimney and of the brake pull rod under the van, both of which changed as a consequence of repositioning the ducket.  Unfortunately, all of the models have a chimney which is correct for RH ducket vans with a brake pull that’s correct for LH ducket ones, meaning that they all have a minor error as they come.  One forum poster did seem to use this to promote the notion that Bachmann should only have marketed one body type, which I found strangely backward-looking; I’d much rather we were offered maximum choice as to the bodywork, even if it does mean that some minor details have to be corrected by what is really minor surgery.  One other thing, which I’ve not seen mentioned elsewhere but only affects (I think) this particular van, is that the exterior vacuum pipe (installed when the vans were vacuum through-piped by BR) should only appear on one side – this I’ll rectify when I get around to relettering and weathering.

As ever, the add-on ‘bag of bits’ has caused some consternation – these comprise the brake pull yoke assemblies together with the catch bars that on the real wagon, prevent any loose brake rigging from descending to the ballast and thereby causing great mischief.  The shot below shows these fitted into place – you’ll also note that I’ve removed the NEM coupling pockets, which if it’s something you need to do, is obviously easier now than later.  The yoke assemblies are plastic, and fit (with some persuasion) into pilot holes in the back of the brakeshoes, then the catch bars (which are metal) go over these.  The spigots which locate the yokes have an offset, which should be  arranged so the yokes sit lower than the spigot (otherwise they’ll foul the axle), and the catch bars are best fitted by first inserting the end with the small cross shape into the hole in the floor, then locating the other (longer) end into the gap in the framing behind the headstock.

In each case, an appropriate adhesive was used to keep things in place – once fixed, the whole assembly seems quite sturdy.  You might also see that I sorted the brake pull whilst I was at it (the original position shown by the white tell-tale mark); if you’re canny as to how and where you cut it, this literally takes less than five minutes. The image is clickable (to two levels of enlargement) if you want to get in really close: 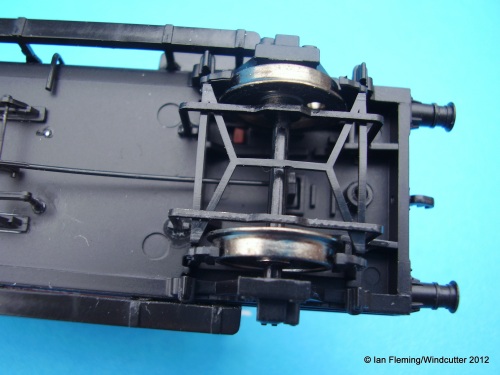 Usage of the vans in the BR period was more widespread than might be imagined.  Whilst they were obviously never as widespread as the much more numerous LMS, LNER and BR 20 tonners, I’ve seen so many pictures now showing the Southern vans off-Region that I’ve long since stopped counting, and really there’s no reason why they wouldn’t have wandered just as the LMS and LNER brakes did – they wouldn’t have been restricted by lack of duckets or being single-ended like the GW Toads, and there’s some apocryphal evidence that the greater oomph of their 25T rating could have endeared them to staff in some instances.

Edit 2.12.12 – this shot on  Jodel Aviator’s Flickr stream depicts a van just like the one above in trip freight use at Northampton in 1966.

You can find a further review of the models, including more in the way of history and build details, on Graham Muz’s SR-themed blog.